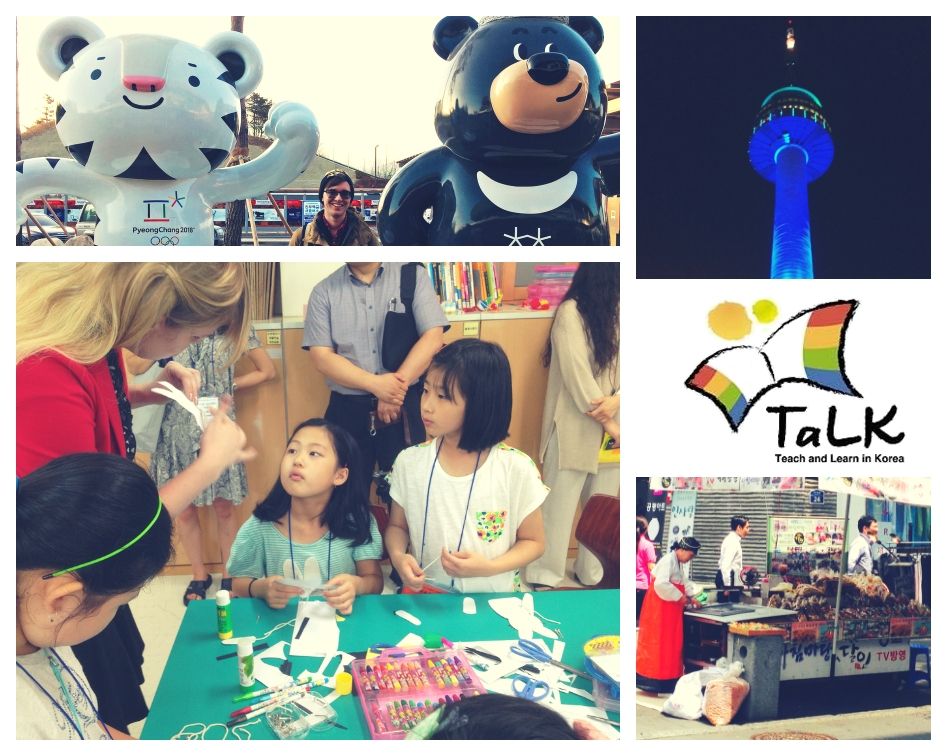 The Talk program is a six-month program starting in August (Fall Semester) and February (Spring Semester).

Students can remain full-time at The University of Missouri during their time in South Korea and will be back in time to start the following semester. (See Academics below for details)

Interested in this program? Please complete our Interest Form

The Teach and Learn Korea (TaLK), program is jointly sponsored by the MU Asian Affairs Center and Office of Service-Learning. TaLK is a Korean government scholarship program known as Teach and Learn in Korea. The program seeks to train native English teachers and overseas Koreans to teach practical English in after-school classes at rural elementary schools.

Program participants, known as TaLK scholars, are given the opportunity for personal and professional enrichment through duties and responsibilities established by the Korean government. As English instructors, TaLK scholars create original lesson plans for varying grade levels (i.e., first through sixth), and teach in the classroom with a Korean university student or local Korean teacher. As explorers fulfilling the “learning” part of the program’s mission, TaLK scholars are encouraged to travel around Korea to learn about the history, culture, language and people.

TaLK scholarship recipients receive an array of benefits which include, but are not limited to:

The TaLK program, which began in April 2008 under the direction of former South Korean President Lee Myung-Bak, is designed to support public English education in rural areas of Korea, where the opportunity to meet native English speakers is rare and educational resources are limited. Under the guidance of the National Institute for International Education and the sponsorship of the Ministry of Education, Science and Technology, the TaLK program has awarded government scholarships to over 2500 participants since its inception.

TaLK is offered during the Spring and Fall semesters. You will begin your program early in February with an orientation before going to your schools. The program lasts for six months.

Students can also elect to complete a full year with TaLK.

TaLK program participants will earn a minimum of 12 MU credits. These credits will consist of a combination of service-learning credit and independent study credit through the student’s academic department. These courses are designed to integrate academic and experiential learning with cultural immersion, identity exploration, and global engagement.

INTL_S 4290: (3) Pre-departure preparation at MU and one month of orientation taking place in Korea. This class consists of several classes/seminars/meetings at MU with Asian Affairs Center and Office of Service-Learning staff and instructors to prepare MU students for classroom teaching in Korea, cultural similarities and differences, Korean issues and current events, what it means to be of service in another country, and what is expected of them throughout the semester.

After arrival in Korea, students will be participating on-the-ground orientation with all of the TaLK scholars from other English-speaking countries.

SRV_LRN 3028: Global Service (6). Students will earn 6 credit hours while engaging in their service in Korea. These credits would be awarded upon the completion of the entire program, and primarily consist of the experience gained during the 15 hours/week of English teaching and work with youth that would happen over the course of approximately 4 months. The course is to promote service-learning through direct contact, classes, discussions, reflections, and projects while living in host country. Academic coursework will emphasize the development of critical consciousness while engaging in reflection.

Final three (3) credits come from an MU distance-learning or independent study course of student’s choosing through and is arranged by student and Academic or Service-Learning Adviser based on student’s academic needs. Students will have ample time to do this coursework while also honoring their responsibilities as TaLK scholars, and will have access to the internet as part of their housing agreement.

You will be enrolled in MU courses and are guaranteed to receive MU credit for successfully completed coursework. Grades earned on this program will calculate into your MU GPAs and appear on your MU transcripts when grades are recorded by the Office of Service-Learning. You must work with their academic adviser(s) to obtain pre-approval as to how courses might fulfill degree requirements.

Students who have already graduated can participate in the TaLK program the semester immediately after graduation. In this case, participants are only required to enroll in the Pre-departure orientation class.

South Korea, formally known as the Republic of Korea (ROK), is an East Asian state located in the southern part of the Korean peninsula, bordered by North Korea to the north, Japan to the east and China to the west. With an estimated population of over 48 million people, South Korea is renowned for its astonishing transformation over the course of 60 years, rising from the ruins of devastation caused by the Korean War into a developed nation with one of the fastest growing economies of the 21st Century.

Korea is a dynamic country with committed interests spanning from education and sports to the arts and sciences. At the bedrock of the country’s interests is education, which maintains competitive standards in all fields of study. This value system is attributable to a deeply-rooted and firm belief that future success of the country rests in the minds of its educated youth. In an effort to provide an equal opportunity for all Korean students, the Korean government is offering programs to strengthen education in the public sector, some of which provides support for English education in rural areas.

An extensive network of transit systems (trains, subways, buses) provides convenient ways for travel around Korea. Fast, wireless internet is available in virtually every corner of the country. Many Koreans are willing to assist visitors who are unfamiliar with the Korean language, and local universities offer an array of courses for individuals who want to pursue their studies in Korea. Korea has embraced progress while honoring its traditions, values and culture. Familiar Korean icons include: kimchi, a spicy dish made from fermented cabbage; the traditional hanbok costume; and global industrial giants as mentioned above.

Teach and Learn in Korea (TaLK) is sponsored by the government of the Republic of Korea and is coordinated by the National Institute of International Education (NIIED), a branch of the Ministry of Education. NIIED works to develop human resources, cultivate cultural identity for overseas Koreans, and coordinates government scholarships for international students interested in study and work in Korea.

The Provincial Office of Education (POE) or the elementary school will provide accommodation for participants in the program and make all housing arrangements. The type of accommodation offered varies from city to city, and possible options include an apartment or a one-room studio.

When the POE or elementary school provides housing for the scholar, appliances and furniture may be provided. Scholars, however, cannot request or demand more appliances or furniture than those already provided by the POE.

Any and all fees, charges, costs, taxes, expenses, etc. incurred in using the accommodation is the responsibility of the TaLK Scholar. These may include water, gas, electricity, internet and monthly building maintenance fees.

Applications will be evaluated on the basis of a student’s academic transcript, quality and depth of the responses to the essay questions. In addition, students must have at least a 3.0 GPA and have completed 60 credit hours (Junior standing) before applying. Only Students in good disciplinary standing with the University will be considered. A personal interview may be required. Admission to a global service program is not guaranteed.

There are multiple steps in the application process for the TaLK program.

Application Information in step by step details will be posted for the Spring/Fall Cohort once the group has been accepted in My Study Abroad.