The MU Office of Service-Learning has been serving Missouri since 1995 and each year, the amount of service grows. During the 2016-2017 academic year, 4,525 students contributed 256,791 hours of service to Missouri through the office’s Global Service Program, Service-Learning Courses, Civic Leaders Internship Program (CLIP) and Minor in Leadership and Public Service.

“When you come to MU, you serve,” says Director of the Office of Service-Learning Anne-Marie Foley.

In 1995, the Office of Service-Learning was created to support the community through experiential learning courses that are now offered campus-wide. Students have the opportunity to work with more than 300 non-profit organizations, 150 governmental offices and seven nations—all while earning credit towards their major or a minor in leadership and public service. 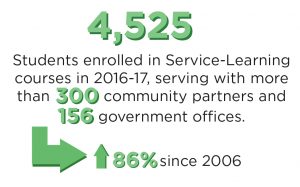 However, these programs have not always been open to all students on the MU campus.

“When I first started in 1990 in the Honors College, I was really interested in taking some of the finest students in the state and getting them involved in public service,” Foley says. “The idea was that their great skills and their enthusiasm could be used to empower the lives of others, and they would think of themselves as leaders and people who contribute their lives to public service.”

Foley began a program within the Honors College that became so successful that a campus-wide office was opened five years later. Now, all programs within the Office of Service-Learning are open to all students, with a belief that experiential learning should be a part of every student’s education. 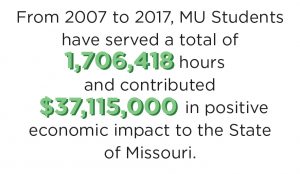 “Right now, the idea that experiential education is an important and central factor for students’ own personal development and professional development, but doubly important is to give back to the state that has given to them,” Foley says.

In the past 10 years, more than 1,706,400 hours have been served by MU students, generating an economic impact of more than $37,115,000 to the state of Missouri. With these numbers, the office has received great recognition locally and nationally, and has earned multiple awards for public service and curricular engagement.

“Community service and engagement to the community has become a central focus at MU because we have some of the finest programs in curricular and co-curricular engagement in the state and in the nation,” Foley says.

The success and growth of the Office of Service-Learning would not have been possible without the support of the office’s partnerships with departments from degree programs campus-wide. In a 2016-17 survey of employers, 95 percent of students who served were rated “excellent/very good” in all professional categories, which includes cooperation, dependability, resourcefulness, attendance and interaction.

“Our students are so remarkably successful because the jobs that we involve them in are real,” Foley says. “Every single job description, every single activity they engage in is in our neighborhoods, our communities, our non-profits, our schools; they are job descriptions that they have given us.”

Kirsten Pape, Assistant Director and Internship Coordinator of CLIP, says the success of these programs helps students reach their career goals. With the experiences and support of that the MU Office of Service-Learning provides, students are able to advance within the professional world.

As the Office of Service-Learning continues to grow, the positive relationships with students remains the top priority.

“We’re trying to create a sense of community,” Pape says. “Because at the end of the day, it’s about continuing to support the students.”