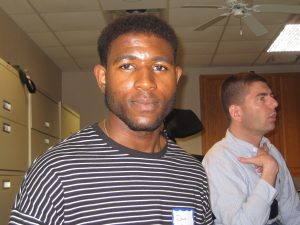 On my first day of service at Kids in The Kitchen, I had a conversation with the mother of one of the children attending the program. We discussed the problem of bullying at the high school that her son attends, which also happens to be the same high school from which I graduated. She went on to describe several accounts of harassment that her son had complained to her about and said that there were multiple perpetrators causing these issues. She did not mention whether or not her son was being victimized as a result of his disability, but she did say that he was less able to defend himself from physical abuse as a result of it.

The mother explained that when she went to report these multiple acts of harassment to school officials, they took no course of action. Instead the school came up with several excuses to justify why she shouldn’t worry. It seemed as though nobody within the administration was really concerned with the seriousness of her protests and that the school had created an environment where inappropriate actions were tolerated.

As I listened to her accounts I was very startled, as I was unaware that such things were taking place at my former school. In this moment, I realized that I was in a unique position of privilege, as I never had to experience or witness such acts of hate. I was also saddened as I felt that her son had been robbed of justice, a right that is meant to be enjoyed by all humans.

This conversation enlightened me to the realities of people living in different life situations than me and caused me to reflect on how social systems can often times fail to accommodate the needs of those who differ from the general public. It caused me to realize that it is very important that individuals have a sense of understanding and tolerance for everyone, as this is the only way to ensure that everyone gets to enjoy the same freedoms no matter their personal traits or characteristics.

This conversation reinforced my belief in the importance of service, as I came to the realization that volunteers serve a unique role in helping to restore an individual’s faith in humanity. My role as a volunteer is to exemplify that there are individuals within the world willing to be understanding of someone else’s circumstances. I can help to bring back a sense of justice into a young person’s life, as I can counteract the wrongdoings that society may inflict. This conversation caused me to take my level of service even deeper, as I now try to implement more meaningful interaction into my time spent serving. I focus on getting to know each child that I am working with and see what areas they might need help or guidance with. I feel that going this extra mile will pay off in the long run, as I will be helping these kids to retain their sense of hope. By modeling after my footsteps, they will be able to influence others within their schools and community to decrease the frequency of acts such as bullying.