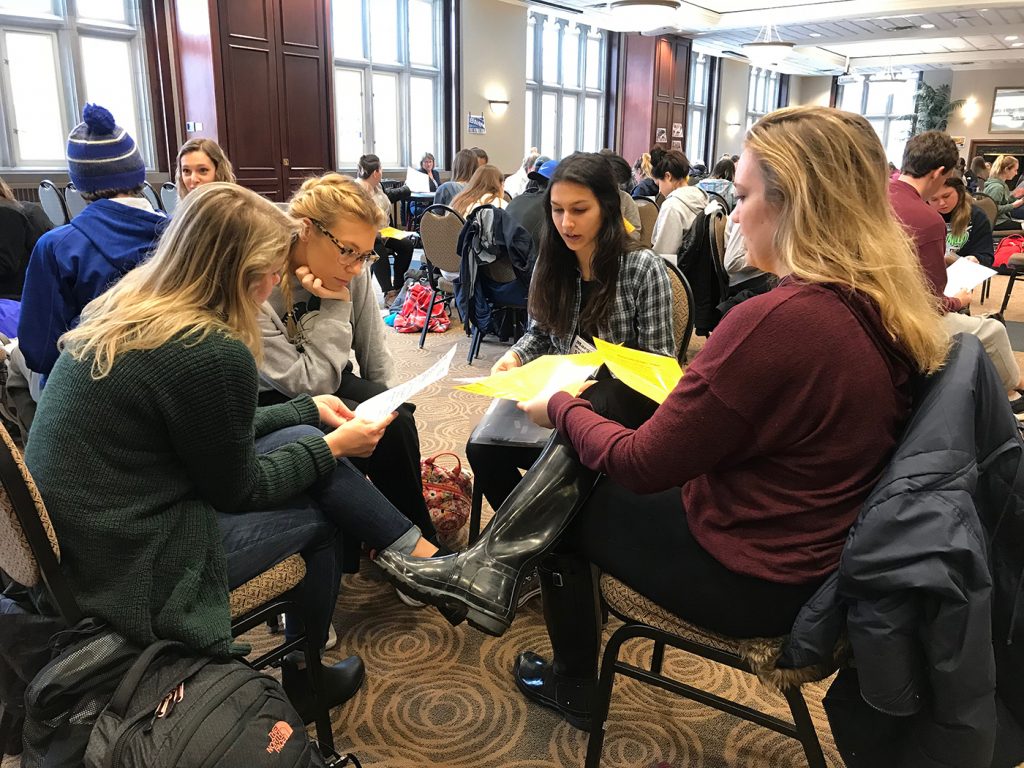 Earlier this semester, MU Community Engagement Project (MUCEP) students took the time to reflect on the lives of those living in poverty by putting themselves in someone else’s shoes.

The MU Office of Service-Learning hosted the Missouri Community Action Poverty Simulation on March 19 in Stotler Lounge for MUCEP students to learn about the hardships that low-income families endure.

Each semester the Office of Service-Learning hosts the simulation to further the service work of MUCEP students. The goal is to challenge students’ perspectives on those that are living in poverty, while also applying concepts learned in class.

“Everything we do, we try to help students be more aware of the challenges of our society for vulnerable populations,” says Anne-Marie Foley, director of the Office of Service-Learning. “For a service-learning course, understanding social injustices helps us be more impactful and better servers.”

Before the simulation, students were given a description of a real person who is or was living in poverty. The students then take on that person’s life.

“This is not a game,” Foley told the students. “Reflect on the fact that we are talking about real people.”

For four 15-minute “weeks,” students had to complete tasks given to them, including going to school if they were a child, getting a job and paying rent. Many students found themselves stuck, unable to get over the barriers they had to face.

Sophomore MUCEP student Abby Kaczmarek knew the simulation was going to be difficult, but did not realize the challenges that would come.

“Originally, I was dreading the simulation because I thought it was going to be really hard, which it was,” Kaczmarek says.

During the simulation, Kaczmarek played a 21-year-old male who took care of his family because the father of the family was in prison. She had three younger siblings—one being a baby—creating a demanding life to simulate. This gave her a new view of people living in poverty.

“It was very difficult and I felt like you just ran out of time (to do the weekly tasks),” Kaczmarek says “It definitely changes your opinions on people who are living in poverty.”

The simulation gave students the ability to think about the services they are in, while also providing an understanding of who they are serving. Foley hopes that the Missouri Community Action Poverty Simulation impacts all of her students so that they can apply it after the course, in the real world.